These past 8 days have seen two cataract surgeries.  In one sense awesome, and in another, disappointing just because man has not accomplished what nature has accomplished (beginning with the first photosensitive cells, developing quickly in the Cambrian Explosion period some 550 million years ago). I felt obliged to create something with polymer clay to remind me of the event, and show that I am grateful for the improved vision, yet know that what was lost was far more complex in design (yes, it had gone awry from occupational and environmental impact) than the lens that replaced it.

So here is an eyeball sculpture I call “ode to cataract surgery”.  Notice the little metal shield that I used as the compound eyeball – stand, was a leftover part of the recovery routine to protect the position of my new lens during sleep. 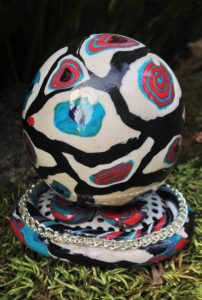 Early on, eyes were just eye spots, then photo-cups, later developing into pin-hole cameras, then cameras with optical chambers and mechanisms for focus.  Check out the wonderful wikipedia link HERE. What an astonishing range of adaptations emerged during evolution for the detection of reflective bodies in a range of wavelengths, for discrimination of various high and low light intensities, monitoring object motion and permitting real time adjustment in resolution. In most vertebrates the upside down and backwards evolution allowed for pigment cells to protect the rods and cones, an arrangement not present in many other eye types. And with this….I give you a magnificent quote ….“if numerous gradations from a simple and imperfect eye to one complex and perfect can be shown to exist, each grade being useful to its possessor, as is certainly the case; if further, the eye ever varies and the variations be inherited, as is likewise certainly the case and if such variations should be useful to any animal under changing conditions of life, then the difficulty of believing that a perfect and complex eye could be formed by natural selection, though insuperable by our imagination, should not be considered as subversive of the theory” (Charles Darwin).  I love it, even though it is a very run-on sentence (ha ha) it is right on point.

Here are a couple other views of the various crazy eye canes I made with polymer clay to create an compound eyeball sculpture over an emptied, and mostly round chicken egg.  Just fun. Yes, I think I will give it to my eye surgeon… who was also awesome, I wonder if he will laugh.

This mosaic egg was done (one of the first I did, as I recall) with egg shells that were dyed with traditional pysanky dyes, which are pretty intense compared to the typical egg dyes that one gets in the craft stores.

Eggs are emptied of contents (not necessarily carefully, but just any old cracked (and hopefully eaten) egg shells, and the little membrane on the inside of the egg shell removed with water and slight rubbing, and dried.  I used yellow (as is typically done for pysanka, as a mordant and then moved the egg shells into the dye that I wanted them to be (in this case pink, green, and there are some natural brown shells as well.  My tongue in cheek – art in this egg is that the egg shells at the top of the egg are expressly saved from the egglands’ best eggs, where they have their little “mark”  unfortunately, washing the egg shells from egglands best marked eggs smears the mark a little.  But you can still see it. 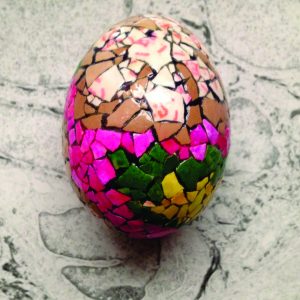 White glue is used to attach the mosaic pieces, and I think this coating is probably polyurethane.

This egg was just so fun to make, and I learned some things (which I always do when experimenting with polymer clay). I used two types of armature in the spines in the egg, which is sort of like an alien sea urchin, metal and wood. The obvious wooden armature is the small dowel of wood, one end of which I sharpened and the other was a bent wire. A third curly blue strand has no armature, but is also quite thin, and it did not slump under its own weight during three curing processes. 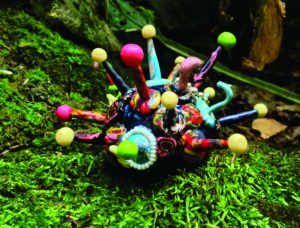 Step one was to cover an emptied chicken egg with translucent polymer clay (color probably doesn’t matter), a very thin layer, and before curing I carved an equator. After curing it was easy to just poke through the shell at the equator so I didn’t have to use my dremel (which makes a horribly dusty cutting event). This leads me to believe that if I can create other shapes in this same way, not just half-an-egg shapes.  I covered the half and created a “flat bottom” for the egg and drilled, by hand, a about a dozen holes (which i retrospect I would drill at a later point were I to do this again.  I cured the egg again, and added the rounded spots and made the spikes and curves and cured them each separately.  I trimmed about 1/8 to 1/4 inch of clay, exposing each armature, at the base.

Lastly I assembled the spikes and curls by pushing the exposed armature at the end of each into the holes I had drilled, using just a little bit of liquid polymer clay to insure a bond. I cured the egg again, and then added the balls at the ends of the spikes and curls (not the tiny blue one, as it would certainly have slumped under the weight. The balls were made with polymer clay and some yellow powder that causes the clay to fluoresce after exposure to sunlight.

Then lots of Varathane to cover.. ha ha.

This polymer clay egg box was made using left over clay (marbelized) smoothed with a brayer over a wooden egg (dusted with baking soda as a release). I carved an equatorial cut in the coating of polymer clay just before curing.  When the top and bottoms were separated with a knife, the flowers and leaves and beads were added.   I actually preferred, after this experiment, using whole eggs, not wooden eggs, as separating the wooden base from the cured clay wasn’t easy. 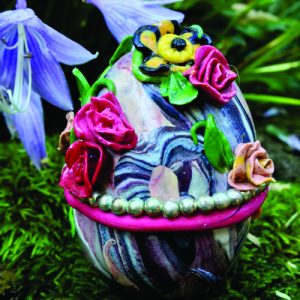 This pysanka egg is from the middle 1990s I bet. I didn’t keep track of dates. 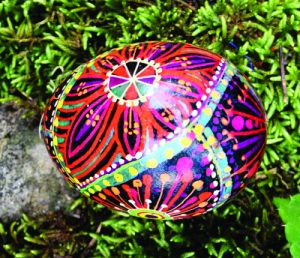 I really had not made a polymer clay cane until this year.  I didn’t fully comprehend the amount of clay that could be used to make the very detailed canes that are found commercially. I saw an image online and about fainted – this older gentleman (I think it was a photo from somewhere in Germany) had more clay rolled into a cane than I could probably have lifted. It was an enormous, several foot long, and several inches in diameter log.  Purchasing clay from some retail store it would have amounted to several hundred dollars in Fimo or other.  An investment that would not likely be made by a kitchen-table-crafter such as myself.  Anyway, this egg, which I actually kind of like, was made of the tips and ends of canes that I had left over. 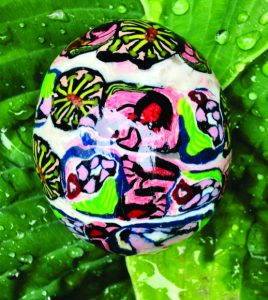 Egg shells dyed all shades of red and orange-dyed shells were crushed into small pieces and put into place on a blown chicken egg that first had been darkened with a black sharpie, with ordinary white glue.  All sorts of different colors are available to dye broken chicken shells, but I use pysanky dyes that I get from the Ukranian Gift Shop.  This egg was made during a visit from my son, and his wife (Pepsi) and my granddaughter (Corin). 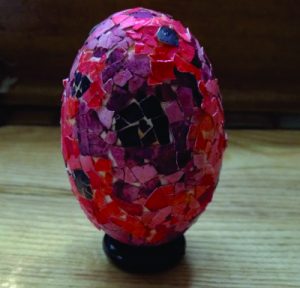 This was one of the first cut-a-way eggs I made: first a base coat of peach colored polymer clay rolled out thin, applied and then rolled smooth on the egg, and then cured. Using a dremel cutting bit I created four windows in the egg, sanded them even, then sliced up a real tiny clay pot to fit inside this gazebo type structure.  I covered the egg with polymer clay cane, made borders for the four windows and decorated inside and outside with polymer clay flowers.  It was exciting to figure out this technique (which while is not new in the sense of never being done before) was certainly new to me.  Loving to decorate eggs in general, this was a blast.

I have listed this type of egg ornament on Memory-beads.com, as something that would be nice to do with actual flower petals (some of the clay here does have flower petals ground into it) to commemorate a special easter, or any event. 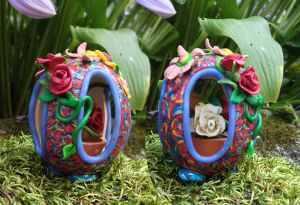 This is a textured (and dimensional) flower egg made with a blown chicken egg and polymer clay. Two views of the same egg. 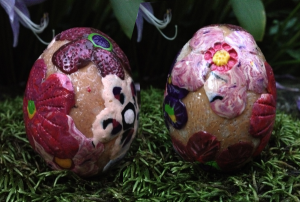