This egg was one of the first that i cut out a portion of after the finding out online that one can carve out portions of an egg with a dremel. That just opened up all kinds of avenues for having fun with clay and eggs.  This one has faux pearls and a little flower pot with roses inside the cutaway. The specks in the flowers are flower petals from someone’s personal event, to be memorialized. Find out how to purchase such a custom egg on memory-beads website. 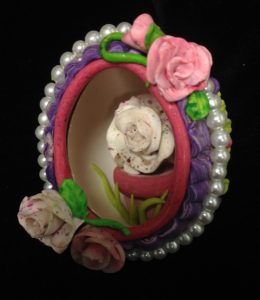 This egg surely was a surprise to try to finish, not the best egg in the world by a long stretch. I began by covering a small chicken egg with a rolled out layer of glitter-red fimo, marked out circles on that layer, then cured. I punched (with a push pin) out the circles (and saved them LOL) and then added a layer of orange, cutting out the holes over the original holes (for each additional layer similarly), then cured again, and added a layer of fluorescent yellow with additional fluorescent powder added), then cured, then a layer of green, and cured again. I put all the left over colors together to create a mokume gane for the top layer. When the egg was warm after each cure i tried tied to trim any extra clay off each of the newly added color. I chipped the egg shell out after all layers were cured. BTW, have you ever tried to sand the inside of such a structure. I could not find a tool, but finally put a pencil thin stiff bristle paint brush in the end of my variable speed drill. That worked a little, but finding the right angle for brushing off the inside of the areas between the holes was challenging.
When I began sanding I found that some fracture lines had appeared that I could not sand away. I don’t know whether I should have put all the layers on soft, right from the start and cured once….if perhaps each layer shrank and c 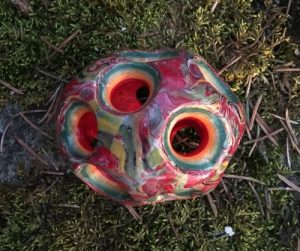 racked with the addition of each new layer? It seemed that the fluorescent yellow was the breaking point, but I would have to try to recreate the error, requiring several eggs to be made again (probably not happening). If I do try another layered holey egg, keeping all layers soft before curing it just once, it will be a black and white checker board egg…. It wont be a perfect test though, since the fluorescent layer wont be there.  BTW, the fluorescent layer did look cool in the dark.
After hours of unsuccessfully sanding out cracks, I just decided to cut my losses. The picture is terrible, it really is kind of an interesting sculpture.

This egg was a little bit tricky to finish, not being an engineer I misjudged the weight of flowers made of polymer clay and the “wilting” of heavier structures as I cured the egg in different stages.  The end result is not stunning, but i kind of like the roughness of the base and cutout parts of the eggs, and the new look of the yellow red and golden roses.  I enjoyed finishing it. 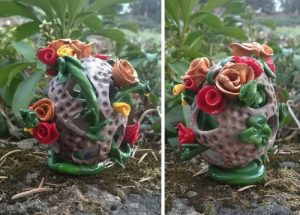 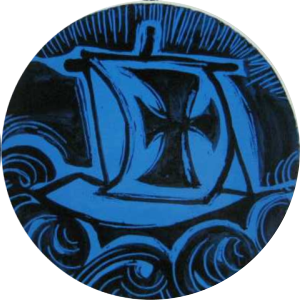 this is a test of whether i put the html code i got off the internet in the right place in my word press blog. the goal was to wrap the text around an object which is round. incidentally this pix was a medallion painted for a church and it represents the apostle jude – a ship on a stormy sea. the answer to word wrap is-that NOPE i didnt get it right. But my son did, and you can view it in chrome but not firefox or old browser versions of explorer

This was just fun and easy to make. I used a butterfly cane (created for something else) with whites browns and black.  I rounded up the cane and just put slices on on willy-nilly, and didn’t forget to poke in an air hole (where the original contents of the egg was removed) so i didn’t get an expansion bubble and cured the egg.  Then i added a collar of the same cane, and made a separate ring stand for the bottom and cured again.  I drilled a hole in the top and built some leaves and added three oreo-cookie-heart-shaped -red-filled objects at the top (the stem on each heart cookie was a metal eye pin about 1.5 inches long (the looped part pushed into the red clay before pressing the cookie parts together.  After the hearts were assembled i poked the eye pins through the hole at the top and squeezed in the leaves a little to hold them in place, cured the egg a third time and sanded some rough spots. The whole thing is coated with Varathane.  I think this will be for one of my grandkids. 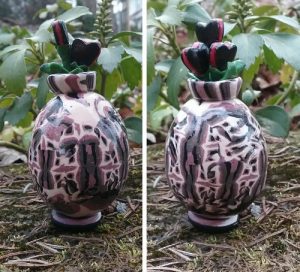 I struggled with the engineering on this egg, LOL, it is a good thing i don’t build bridges.  But the fence stays behind and the short part of the fence is actually attached to the spiral cane egg.  I had to prop and support these items when curing, since the tendency was for the fence to fall apart during that process and not stand plumb when resting on all the fence posts. The spiral cane was just left over clay with translucent in the center moving to grey and black at the outside. The fence was not sanded to make it look rustic. In retrospect, it might have been fun to actually use a technique to have it look like wood… mokumu gani? 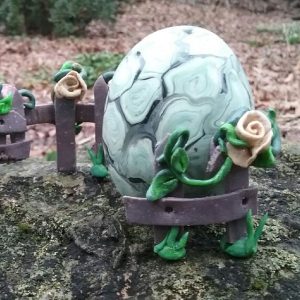 This was a fun egg to make, not perfect, but I just covered a small chicken egg with an 1/8th inch covering of black polymer clay, smoothed it, then used a heart cutter to cut the clay down to the egg (carefully not breaking the egg). THen cured it and used a knife and push pin to finish severing the hearts from the body of the egg. After removing all hearts, and chipping away the egg from the inside, i sanded it and attached metal butterflies embedded in a black, brown and white cane (slitting the ends of the round cane where the top and bottom of the butterfly were, then separating it like wings (under the metal wings).  Cured again, and left without a finish.  I saved the black hearts for another project. 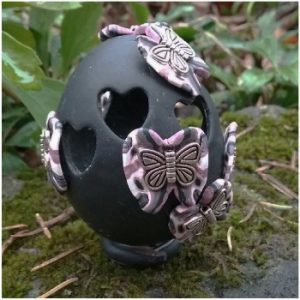