I use up the left over polymer clay that I create for my website called Memory-beads so each of these polymer clay rose flowers on this real chicken egg have been made with polymer clay that contains real flower petals. THe blues typically have delphinium, the pinks, generally pink rose petals, white and peach rose petals in some and red in the others. The greens don’t have leaves in them, but I have done that as well.

I used a rose mold for some of the roses, and rolled the others. Kind of fun to make, but I have not found a sanding tool to finish it off with, when I do, I will smooth up the rough edges. 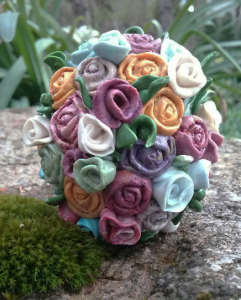 Egg shell and polymer clay decorated easter bunny. The decoration is a blue and black and white cane.  The egg was covered in white and translucent polymer clay (with just a pinch of red) and so was a wooden bead.  The covered bead (before curing) was attached to the body with a collar of clay.  After curing, the haunches and front legs were added and the nose part of the face was added to the bead-body form.  The ears were made of rolled clay, but a hole was drilled into the place where i wanted the ears to go and a piece of tooth pick inserted into the center of the ear and then fixed into the hole i drilled… so there was toothpick extending into the ear (but covered up) and into the head, packed round with same color polymer clay.  With the ears nose and limbs added I positioned this rabbit in the oven so there would be no stress on the ears…. after curing they were fine.

I used a blue and black and white cane of a single geometric flower to put rabbit’s clothes on.  This little piece took a lot of sanding.

I made a little grass stand. and an easter egg. (i forgot that i put the eyes in when i put the cane on the body. Eyes do have a little tiny bit of varathane…. I probably should have varathaned his blue egg as well. 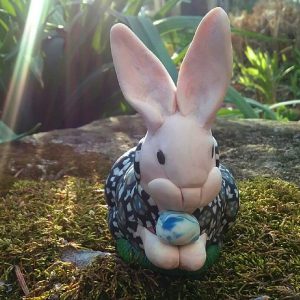 This egg was so fun to make, didn’t have to stress over it, except to check out some pictures of humpty dumpty to remember that his trousers were actually part of the egg-shape.  I started out with a medium chicken egg (i don’t think suppliers like to label things “small” but i think this was small), emptied the contents into the frying pan, and washed it out several times (routine).  I covered the whole egg first in a white-transparent and flower petal mixture of ground up yellow and white roses (you can see the flecks), reasonably thin layer and cured the egg (not forgetting to poke a hole in the bottom where the air could escape without creating bubble in the clay layer.

Nose and eyes and mouth and ears next, and blue for his britches. Cure, added legs and arms and shoes and tie and collar and cured again.  There is a little bit of varathane on his shoes, and bow-tie, and eyeballs, but I actually chose deliberately NOT to have him be shinny.  BTW where is a little blue jeans pocket on his backside. 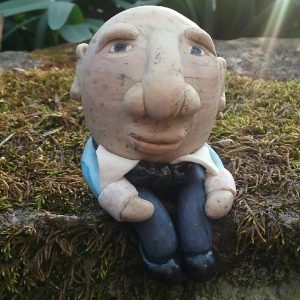 My daughter and i ran the flying pig half marathon together. I made her an easter egg this year to commemorate the event (from two years+ ago), and according to the flying pig newsletter, tomorrow is national pig day — so it is a good time to post.

I also did the Big Pig Gig, i think it was in 2001, cant remember.  Pigs are big in cincinnati.  Here is a polymer clay and egg shell..flying pig egg complete with finisher’s medal.  I thought he turned out kind of softish and cutesi.

His body is a chicken egg covered once in pink and white and translucent polymer clay, the head was made separately but at the same time with same clay over a wooden bead (nose, ears and eyes as well), both were cured. Head and body were joined with some of the same polymer clay and rear and front legs added.  cured again, and then wings added (they have a part of a toothpick which was inserted into a small hole hand drilled into the back, and which also was positioned in each wing to help give it stability during curing.  I had to sand and sand and sand this piece, and it still could use some more sanding.   Finishers medal made separately (not removable, but also not pressed in or attached to the pig body, it can move around the neck. If you want one, you can find it on Memory-beads.com

My thoughts on viewing this again are, maybe the nose was too big, and it could use more sanding.  Ha Ha. 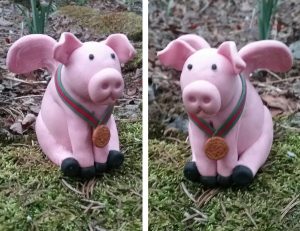