I used a cockatiel egg to make a base, and scored the diameter (circumference or equator — which ever you want to call it) before I cured it.  After curing I used a blade to score down to the egg and through the egg shell (which is easy since the cockatiel egg is very thin). I sanded the two halves and built a little mound for each half (poking several holes in it with an eye pin as a holder for the flowers built and added later. I cured the flowers (with an eye pin as the stems, then clipped the eye pins off to the height I wanted and inserted them into the pre-made holes in the mounds.  Then i built up the grass and leaves the clay onto the eye pin stems, then cured the egg again.  I did use varathane as a gloss. 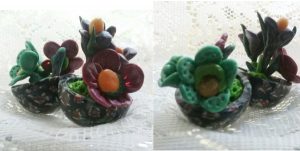 All in all it is not “sterling” but kind of fun, and experimenting is the best part of the whole clay-egg-thing.

I liked the way this particular egg took the dyes. The colors are more subtle and there are not that many hot spots from the commercial egg washing machine. I have not gotten into the habit of ordering eggs “unwashed” for pysanky, just use what comes from the local grocery store. I will say over the last 20 years egg washing has improved, i would sometimes find an egg in a carton that was scarred badly by going round and round in the rollers or whatever they use… completely unusable for pysanky. 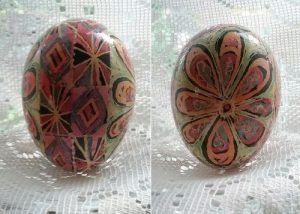 Black dots on this egg are pretty hard to see, but I am posting it anyway.  One learns a lot from enlarging photographs… sadly in this case I learned that my kistka was probably neither hot enough or clogged with ash, as the lines are kind of scratchy and dont look like they flowed nicely.

We learn from our mistakes.  Unfortunately these mistakes were made about 20 years ago… ha ha… 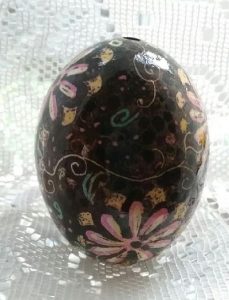