I thought about embedding black-eyed susan flowers in resin, but i wasnt able to dry them so they kept their color and shape. And, it dawned on me at the same time that “eggs” would be a great mold to shape resin in.  The shell could be dissolved in vinegar in just a few hours and then the shape of the egg would remain pretty perfectly.  So, I took a fresh black-eyed susan from the yard, and suspended it in the top of an egg previously blown out, washed and dried (with a reasonably big hole in the bottom part to allow for pouring the resin and stuffing the flower in.  That done i mixed up some resin (i wont give the name since what happened was not the fault of the resin (LOL), and poured it into the bottom, arranged the flower, and filled the rest of the egg shell with resin and put it aside to sit.  This was a medium size egg, not extra large, so i was surprised when i heard a crackling noise from within the egg, and it was bubbling and smoking like a volcano. Anticipating eminent explosion… i took the casting outside and watched through the window.  Bubbling stopped, no explosion, and the resin did harden in 24 hours but what i produced was hysterically funny.  I called it the X-files alien egg.

It did take a while to trim off the bubbles from the bottom of the egg, and soak off the egg shell, and sand it smooth.  ha ha.. total waste of time, but the results are pretty awesome.  ha ha 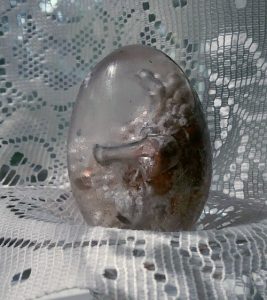 This egg was a total test. I have never cast a whole flower nor a large cast with resin. I used an uncoated egg shell (chipped off the top of a blown egg so i could insert the flower).  The flower (which i could not identify) had three heads each with many tiny flowers that were spikey.

I put a polymer clay base on this egg and a little decoration along the bottom edge. It is just made with left overs.  I did try to learn to use the ultra clear resin from resinobscession…. i have a lot to learn.  I chipped and etched off the egg shell (vingar) and sanded the top smooth and coated it with varathane. 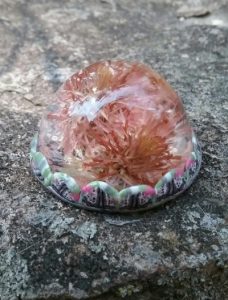