Base was manufactured over a plastic egg (two halves) using paper mache then put back together with more paper.  Then covered with a thin layer of translucent polymer clay (still in halves) and many of the flowers were put on in a two part egg.  The total egg was put together, and cured, and then flowers and background finished.

All in all, i would make the basic halves but the first coat of polymer clay would be a single unit, since putting the halves together was a little problematic. 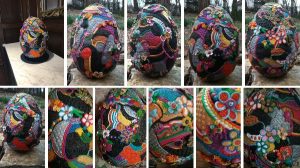