This type of egg can not be sold as i dont have a copyright, but it can give you ideas for an egg that you might want me to make custom with your images, cartoons or ideas.  This is for my sister who was at one time a Disneyland cast character. 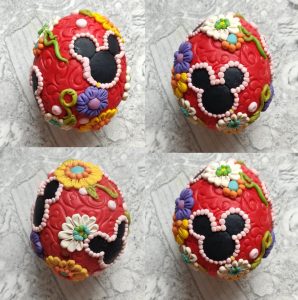 I used the colors of the Ukranian flag to decorate this egg with polymer clay.  I have done many pysanky (eggs, chicken, ostrich, goose, finch, cockatiel, and other eggs) but this is quite different from that technique. I feel for the Ukranian people at this time and I will make, and send, a similar egg to individuals who show me proof of a donation to a legitimate Ukranian relief fund. 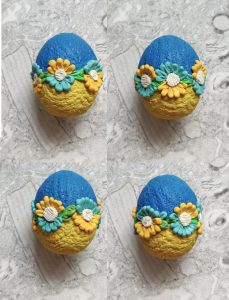 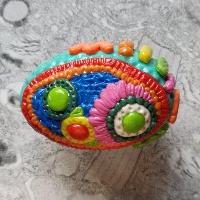 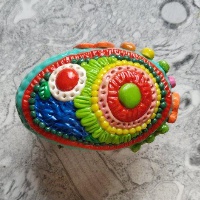 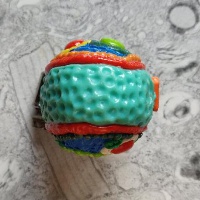 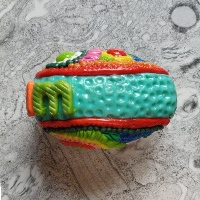 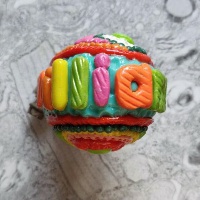 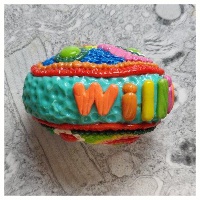 Custom keepsake decorated easter egg with the name Michael. Get a custom easter egg by ordering on my website called memory-beads. 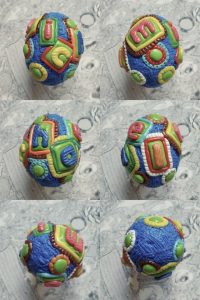 Custom decorated easter egg with the name Kora. I can make such an egg with your chosen name, just ask. Contact me through the Memory-beads website.

Here are some pix of this style decorated egg. 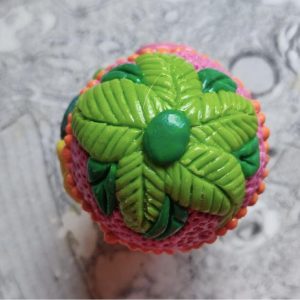 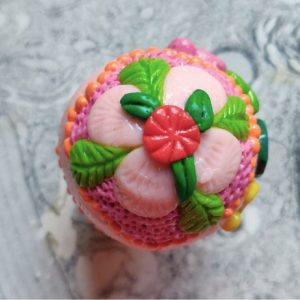 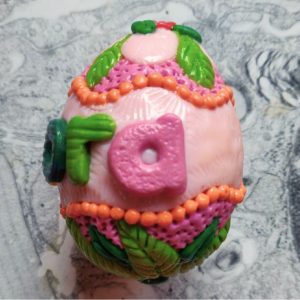 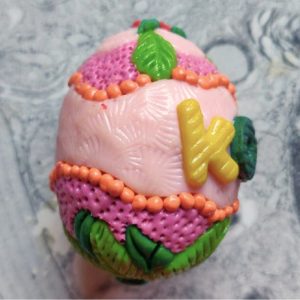 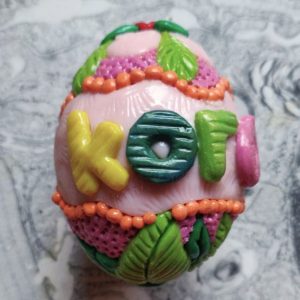 Custom decorated easter egg with the name Hayden. This is for my niece but I can make an egg decorated like this for you custom. Just ask, and order below, or at this website Memory-beads.com 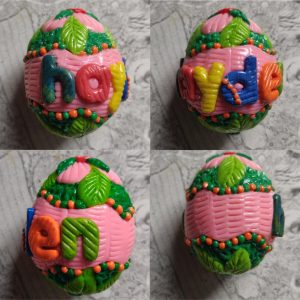 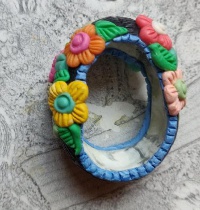 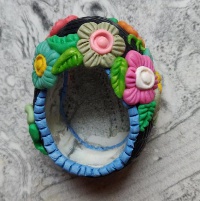 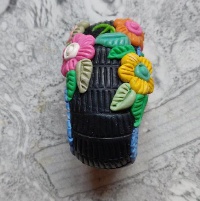 Just a fun little things of almost no consequence unless it makes someone smile.  This is made with a thinly rolled sheet of plymer clay over two eggs; one large and one very small. After curing, the eggs were chipped away from the polymer clay, the draping edges trimmed to be level when place on a flat surface, and then I just played games making flowers, two eye holes, and a smile and tongue.  The round polymer clay beads that became the eyes I could have done a better job on, but this was just an experiment. They roll forward to show eyelids and back to show the pupils.  there is a wire bent in a u shape that I attached to the inside of the object with polymer clay. It holds each bead (eye) in place.  On the back of each bead (eye) i added a little mound of polymer clay that keeps the eye from rolling past the eyelid paint. The pupils are painted as well.

I have no clue what one would use this for. Perhaps a flat back could be added and it would be a refrigerator magnet, or perhaps weight could be placed inside and a bottom attached, and it could be a paper weight. Alternatively, it could be set inside a small frame (with more polymer clay perhaps, making a dimensional wall hanging or framed 3D sculpture.

The fun thing about this concept is that it has a way of “reminding” one of good times, and I can add flower petals or glitter from a prom night, or other objects that actually give it “meaning” in the keepsake sense. The yellow polymer clay here actually has funeral flower petals in it.

I found this great site for buying eggs that are unusual sizes and shapes and colors. It is called The Eggers Nest.  This goose egg was purchased from them. I put the black layer of polymer clay and the purple border on then cured the clay and added the flowers, cured it again, and then punched out the edges of the egg. At that point i made the flowers for the outside of the black strip and cured again. The inside was designed to look like grey-green-white marble. Buy this on Memory-beads.com

I added a red row for tiny bubbles in the top picture. 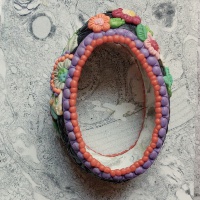 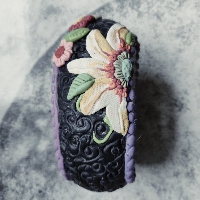 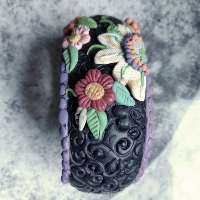 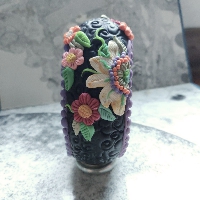 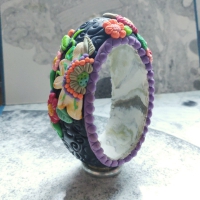 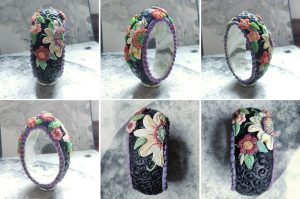 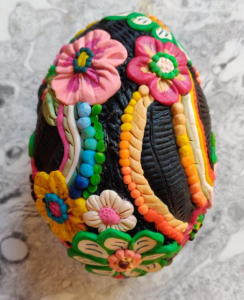 The base of this decorated egg was made by creating a fabric-mache covering for a leg’s egg (yep, i still have some of those old things). I did this by using stretchy fabric and wood glue in much the same way as one would use paper and glue to make a paper mache shape.  I cut with a blade the finished covered egg down the “half” line (circumferentially where the leg’s egg has its opening) and opened the egg and removed the plastic.  I cant remember whether i covered that plastic egg first with a thin  wrap of plastic wrap.  I would only have done that to make removing the leg’s egg more easily as i wasn’t interested in putting the leg’s egg  in the oven to melt when i cured my polymer clay.

After removing the leg’s egg i wrapped the mache egg with more fabric and wood glue to seal the two halves back together and to strengthen it.

After it dried i did poke a small hole in the bottom so the air would escape during curing of plastic, then just began to add flowers. The height of the egg is just over 4.5 inches.

Some sculpted flowers on the egg are “memorial flowers” in that the polymer clay contains flower petals from a funeral arrangement – a nice way to keep the thoughts of those loved and gone around.  I can customize this type of decorated egg with your wedding or funeral or birthday or anniversary flowers if you contact me through the Memory-beads website.

The “track-like” texture on the black restful places is made with the lid of a peanut butter jar, rolling the side of it over the clay. All other decorations made with polymer clay are pretty routine, nothing fancy, just entertainment for me.  You can purchase this egg HERE, or from the woo commerce widget on the side of the page. I know 60$ seems like a lot of money but it took me many more than six hours, and shipping (which i include) would otherwise be $10.