Just going through old stuff and I found this mixed media card I sent to her many decades ago. Lauretta Louise Milner – Turner. You were a dedicated mom. Thank you for that. 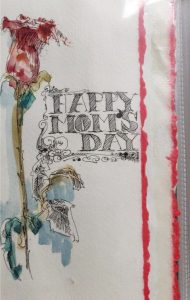 First published in 1922, the Velveteen Rabbit was Margery Williams’ first and most popular children’s book

i was a little sad this morning, i am putting notes in the stockings i knit for my mom and dad when i was about 13 (which mom kept…. the name mom on her stocking was a little wonky… an upside down U where i forgot to knit the red yarn at the bottom of the O) and two newer stocking for them, one i knit this year for dad though he has been dead for 29 years, and the one i knit about 10 years ago for mom that are more contemporary, completing a new set, now that mom has passed away also.

In the note I will tell my dad that he was an amazingly dedicated man, both to a wife who liked to push his buttons with vulgar speech and who continually spent more than he could earn, and to his children, though we really didn’t know him that well until he was diagnosed with cancer because he was so restrained.

I will tell my mom she was luckier than hell to have met my dad, but that she also dedicated herself tirelessly to caregiving. First and foremost to us as kids, to people she hardly knew, and family, one of my sons, her second cousins, a seminary student, the little girl down the street whose mother died when she was so young, even to strangers, to baby sitters like Ms. Morrison and to relatives like Aunt Charla, and both her parents, caregiving until there was no life left in them, some of whome she watched them pass peacefully into the hereafter like her own husband. That is an amazing trait. I am not a caregiver, just dont know how she did it.

My dad, ha ha, was an artist…. My brother Russ sent glossy pictures of a santa claus that dad drew early on (i can tell by his signature). i think he gravitated toward santa as a an entity who needed to help others, and also dad needed concrete confirmation that there was infact a good god in the universe. I think the latter was so remote to him intellectually (as a chemist and engineer he just wasn’t able to dismiss the unfathomability of an eternal entity — and like some of my sibs, me and anyone with a even part of a brain we have this constant doubt). He became that santa once for the family gathering after his health began to fail. I have a clear picture christmas morning in LA with daniel tugging on the sleeve of his red santa suit but with dad so into handing out presents that it went unnoticed. I am sure this was one of the most significant days in his life. 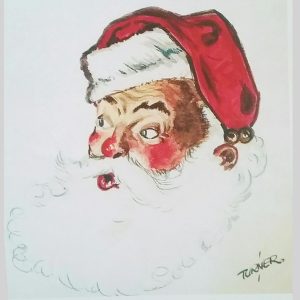 This puzzle was made just for my own edification to establish when the earliest christmas celebrations occurred and which pagan rituals were incorporated. It almost seems cliche to say that we think we are so smart, but in fact just about everything we do has roots somewhere millions of years ago, part of the biology that we all possess, and the feelings, and needs, and cosmic changes and hopes and fears, and legends and truths.

What I found most interesting is how the christmas holidays were really considered frivolous, and banned, and lobbied for and against in the last few thousand years. It seems a little silly for anyone to get all bunched in a knot over it at all… it began as a cluster of winter pagan rites, it is currently as pagan as merchandising could make it, it has proponents and opponents, and it all boils down to “choice”  Celebrate christmas as LOVE, then everyone is fulfilling the name it has been given. I doubt that anyone in heaven would suggest any other reason for christmas than LOVE.  Here is an image, puzzle and answers, and a link to play online, and a link where i will send you the pdf to print and distribute.  MERRY XMAS.  Here also on the subject is the christmas article on birth and death of christ by Mike Jarvis ” Update birth and crucifixion dates of Jesus Mike Jarvis“, which is always a good read. 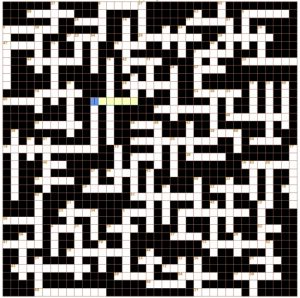 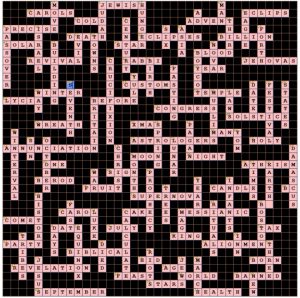 This touched me so deeply.  I just want everyone who has kids to learn to sing along with this signing and smile with these smiling faces.  lyrics below, and link to the video are provided.

Thank you to those of you who created the music (Katy Perri), found the inspiration to gather the women and children, teach them the signing Makaton and assemble this video.

Heart beats fast
Colours and promises
How to be brave?
How can I love when I’m afraid to fall?
But watching you stand alone
All of my doubt
Suddenly goes away somehow 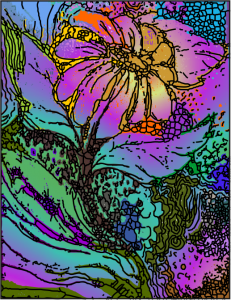 On first glance the phrase “practice makes pleasure” sounds rediculous doesn’t it. But this morning as i walked over my 30,000 piece art mosaic floor i thought to myself, i really do love hunting for all the hidden small areas of nuance, of order, of color-shape matching  that are embedded in random but still orderly places.

In terms of healt and mental alertness it came to me that hunting for order within the vast expanse of chaos is actually fun for me. I laughed and called my mind “puzzle brain”.  This is in no way implying that i have a great mind for puzzles, firstly there are puzzles, e.g. math puzzles, that i could never in a million years attempt to solve, and secondly in a field of more than 7,000,000,000 people, there are millions and millions more adept at everything… not just puzzle solving, but everything.

So just speaking on a small scale, I deduced that I like solving puzzles in my visual world. This includes hunting for the leaves and flowers i recognize as “weeds” in my garden, what i recognize as cracks and chips in my wall paint, dents in my gutters, patterns in my stone walkway, fun qualities in my wooden floors, and in my mosaic tile floor especially.  I like patterns in music, fabric, landscape (trees in clusters) skyscapes — you name it.  If i see wall paper or a brick facade then i immediately look for cut-and-paste types of patterns, and depending upon the number of iterations in one visual field i determine how much effort went into making the pattern “solvable” or “unsolvable”  and thereby assess “worth” to it.

Next thought was “why do i like to solve visual puzzles” and why is this behavior increasingly pleasurable….. then comes the realization that  “practice” is the way we increase the pleasure in all our work.  The pleasure coming from my solving a puzzle is directly linked to the number of successfully solved puzzles, no matter how small, reinforcing the behavior  (this is supposition, and i would love to ask “Hidden Brain” gurus whether I am correct in this supposition). The supposition is that for me  40 years of looking at and sorting electron microscopic visual information (shapes, associations, repetitions) has been a “practice” which is now so obviously a “pleasure” if maybe that circle….  practice – pleasure – practice – pleasure  is not more accurate than the phrase  ‘practice makes perfect’.

The repetition, the reinforcement, the refinement of a task must provide satisfaction and stimulation to the pleasure centers of the brain. (JUST MY OPINION) 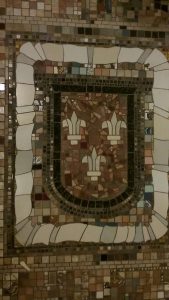 Actually that title should read, “my mom and dad”….. i don’t really separate them into two beings, rather think of them as a pair. Dad has been gone for 3 decades.

Mom was nothing short of “unique” in all ways. I honor her willingness and ability to care and nurture her children, parents, and others who entered her life.  One can say, too, that she did so with an interesting approach.

Here are two links, one to the graveside service and the other to the church service. Both are long, many people had lots to say but the theme was always the same–she never abandoned anyone, even those who took advantage of her. Her values were traditional and her approach often barbed. She taught us integrity.

And my sweet grandaughter Corin has given me a great memory of that service (which she attended)…. an angel zombie with one eye….a picture which was drawn for the occasion (along with a few other zombies)… she was almost 7 at the time. I added the stars on the flight back to Cincinnati, then vectorized it. Mom would have loved it. I think my mom was an angel for many. 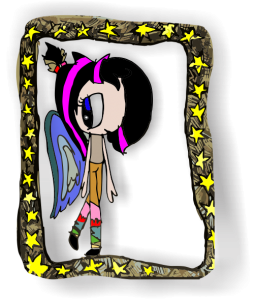